Recently, our group of Master students from the MA Multilingualism visited Piter Jelles Impuls, a secondary school in Leeuwarden, to engage in all sorts of multilingual teaching activities with the students. 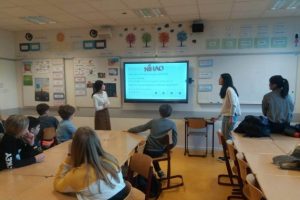 As part of their course on the multilingual school, the students visited the school to see how multilingual teaching works in practice. In preparation for their school visit, the students worked in small groups on a language lesson to share with the pupils of the school. The Impulse pupils learned, among other things, about Chinese characters, and how by combining characters you create new words, and about loanwords into Dutch from French, but also from Turkish.

Vice-versa, the MA students were shown around the school building by the Impuls pupils, who gave a full-English tour. The students were impressed by the proficiency of the pupils and truly saw ‘the multilingual school’ in action. The school recently created a ‘Talenplein’ (language square), that serves to promote different languages in teaching practices. In language education, pupils learn about English, but at the same time also integrate other languages like Frisian and Spanish. Our international MA students were also taught some Frisian by the pupils, making for a successful multilingual day, rich in language exchanges.