Here’s the last of our student post-series on linguistic landscapes! Hope you enjoyed this short glimpse into one of the topics dealt with in the BA programme and the different blog posts the students wrote. This last post was written by Marijke Koelewijn, you can read the earlier posts here: 1 and 2.

Linguistic Landscapes in Groningen: Monolingualism at the Market

Every Tuesday, I go to the Vismarkt to buy fruit and vegetables (and, occasionally, indulge myself with a hot stroopwafel). Being a native speaker of Dutch, I encounter virtually no difficulties in this process. However, I noticed that practically all of the signs on the market are monolingually Dutch. Nowadays, the Netherlands is full of translations into English: as I write this in the university library, all the signs I can see are bilingual. And although you might also expect the local minority language Gronings to be used at the market, it’s not – at least not in written form. So why is the written language at the market almost exclusively Dutch? 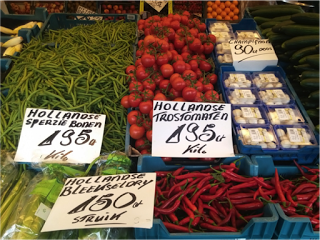 Picture 1: signs with product names and prices at a vegetable stand

As shown in Picture 1, product names and prices are only noted in Dutch. The vendors on the market are clearly aware of the large international population of Groningen – they conduct some of their transactions in English. Why haven’t they translated their signs? One reason might be that it’s not very necessary – surely, a customer can recognize those tomatoes without a sign, and it’s not hard to figure out the price. But perhaps this is also a matter of pride (or, depending on your view, stubbornness): while the English language is gradually gaining equal status with Dutch or even replacing it in more and more domains, these vendors refuse to adapt and keep using their native language. 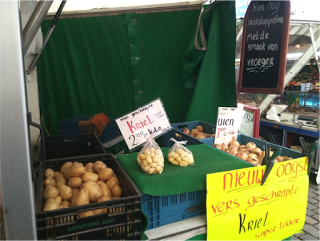 Picture 2 shows another type of sign: used to draw in customers, rather than objectively inform them about the products. The sign in the top right corner reads, loosely translated, “Here we still have potatoes with the taste of the old days”. This message clearly aims to create a feeling of nostalgia in passers-by. I suspect that this works best with a sign in their own, native language. This raises the question of why the sign isn’t in Gronings: a true Groninger might associate Gronings more strongly with home, family, tradition, and lovely potato meals. But on the other hand, most of the city’s population does not consist of ‘true Groningers’: many of Groningen’s students come from other parts of the Netherlands, and even the locals often didn’t grow up speaking the language. Furthermore, those who do speak Gronings rarely write it down, and they are also fluent in Dutch. This explains why the market vendors – who might not speak Gronings themselves – don’t use signs in Gronings: Dutch signs reach a wider audience.

In conclusion, while many parts of Dutch life have adapted to the English-speaking community, the Vismarkt in Groningen remains monolingually Dutch in its signage, also excluding the local minority language Gronings. There are various reasons for this, but most of them can be derived from the following: the vendors would gain little by including English or Gronings on the signs, and so things stay as they have always been.