Here’s the second student blogpost in our series on ‘Linguistic landscapes’, this time on the presence of the Groninger dialect, by Anna Huiting (read the first post here). 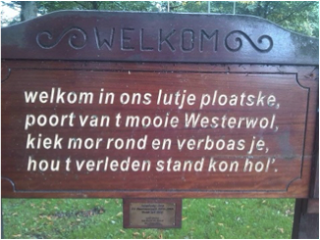 “Welcome to our little town

The gate to the lovely Westerwolde

Look around and be amazed

How the past still remains”

(Translation of the text in picture 1.)

This poem is a welcome sign written in the Dutch dialect Gronings. You can find it when you enter the small rural town of Wedde, a place in the southeast of the province of Groningen. This poem does not look out of place at all in Wedde, but would it fit somewhere on the corner of a street in Groningen, the capital city of the province? This is the point I would like to address. Does the Gronings dialect fit in the capital city or is it rather the dialect of the towns in the province?

The city of Groningen is an international lively city with a young feel because of the presence of many students. It is an dynamic and academic city with one of the biggest Universities of the Netherlands. Because of this environment the Gronings dialect is not as present anymore as it might have been in the older days, because of the strong international mindset.

Still, Groningen is the capital of the province and does try to represent itself as being really Gronings. An example are some shops where you can find all sorts of products called to be typical local products, or customized with a text, saying or symbolic line in Gronings, see picture 2. It seems as if ‘being Gronings’ and the dialect Gronings are an image that can be used for merchandising, where Groningen plays the role of main presenter of this image, as being the capital of the province.

However, when we take a look at the everyday life presence of Gronings in the city we find less examples than we do in the towns in the province. In these towns it seems as if Gronings is still part of the identity of the people. In the local places you won’t really find these typical merchandise products that are being sold as being a symbolic representation of the Gronings image.

On the contrary, you can find Gronings in small daily things like in street signs, names of local places and graffiti, as we can see in picture 3. This local identity is present in the ordinary life, whereas in Groningen it is only present as an image ready to be sold. 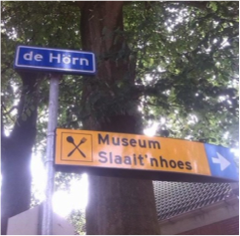 The main point that should be considered here is whether this is a bad thing. It seems as if the capital of the province is losing the authentic feeling of the Gronings identity and with that, losing the connection to the dialect as being part of this identity. Fortunately it looks as if the dialect still remains as part of the daily life and identity of the people in the smaller towns in the province. Therefore, the capital city may try to sell the image, but the towns in the province live the image.