Here’s the first in a series of student blog posts on linguistic landscapes! (Cool term, but what does it mean?)

Linguistic landscapes is all about the mapping of the language around you. Which languages do you see in your environment – on street signs, advertisements, products in shops, the local market, in newspapers; basically everywhere! Linguistic landscapers subsequently try to find out what the function is of using a particular language for a particular purpose, why certain language choices are made and whether these are succesful.

For their course “Introduction to minority languages”, our first year Bachelor students were asked to think about the concept of linguistic landscapes. They ventured out into the city and the countryside to document the language(s) visible in the public domain and to reflect on what they noted.

The first blogpost is by Nikki Beerepoot. Enjoy!

On a quest for language
Nowadays, when you walk down the streets, it seems that everybody finds their phones much more interesting than the world around them. Do you ever pay attention to your surroundings? Because I didn’t until last week. If you actually take time to pay attention, you’ll notice something that’s everywhere; language. Recently we got the assignment to explore the linguistic landscape of Groningen. This means every form of written language you see, like billboards, traffic signs, advertisements, graffiti, menus, etc. So it was time to go outside, and find 3 interesting examples of written language to photograph.

Thinking of a strategy was definitely the hard part of this assignment. Finding an interesting point of view is a lot harder to come up with than it sounds. But eventually I managed to do so, and I chose to photograph three posters in three different places so I could compare them, and hopefully write a blog post that would be worth reading.

Firstly, I came across these two posters in the Noorderplantsoen. I had just started my quest for interesting use of language, so my expectations were very high. The two are publicity for cultural events, which caught my eye because of their colours. What concerns the language, the left poster is all Dutch. The right poster contains some English. I didn’t really understand why the left poster is all Dutch. There are so many foreign people in Groningen that I’d expected all posters to be in English, or at least bilingual. After 10 minutes, my hypothesis was already proven wrong. 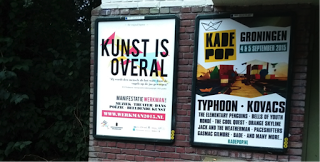 Secondly, I saw this poster in the Oude kijk in ‘t Jatstraat. It stood out, because of the use of language. At first you see ‘stukafest’, which makes no sense at all (to me, at least) until you see the line below; ‘studentenkamerfestival’. For me, as a native Dutch speaker, this was the point where it all became clear. For foreign people, however, it would still be a mystery what this poster actually says, even after reading the line below. (I’m very sorry for the incapability of my camera to take a sharp picture)

The last poster I caught on camera was an advertisement for a gym at the Westersingel. While the name of the gym is English, the rest of the poster is, again, all Dutch. ‘Don’t they want foreign members?’ is the question I asked myself. Because not being able to read the advertisements wouldn’t really persuade me to purchase a membership. 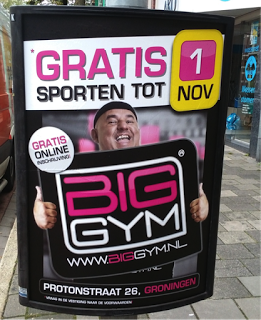 Then again, there will always be foreigners, in every place. But is that reason enough to make everything English? To me, that sounds a bit extreme. We are in The Netherlands, after all. If we’d make everything English, we might as well just skip the whole ‘Dutch’ and introduce English as official language..

In conclusion, I was surprised about finding mostly Dutch posters. Honestly, I had expected to see more of the English language in the linguistic landscape of Groningen. On the other hand, I could understand why people wouldn’t use English everywhere. Besides, it won’t really cause problems, because after all, is there anyone who really pays attention to their surroundings?