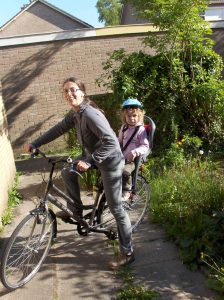 My eldest daughter Martina was four when we moved to Groningen in the north of the Netherlands from Slovakia, our home country. Four is the age when most Dutch children start basisschool (primary school), so she enrolled in a local school, as well. We were a bit concerned about her – after all, she only spoke her native Slovak and we, as her parents, could not teach her Dutch as we did not speak it either. It turned out the school had many pupils from many countries around the world and the teachers had a lot of experience helping young speakers of other languages learn Dutch. They also encouraged us to let her watch cartoons in Dutch. Martina soon became a huge fan of Dora the Explorer. It is a bilingual children’s TV show that introduces children to a foreign language; the Dutch version introduces English. As a result, Martina would occasionally talk to her younger sisters trilingually, such as “Za mnou! Kom op! Let’s go!” (The first two are non-literal, idiomatic equivalents of Let’s go in Slovak and Dutch.) Immersed in a Dutch environment most of the day and receiving additional language support classes at school, Martina soon became the best speaker of Dutch in our family. She even used the language creatively to have fun with it. For instance, she called a guinea pig a zeevarken (literally sea pig) even though she knew its Dutch name is cavia. She called it this way after its Slovak name morské prasiatko (literally sea piglet) and analogically to Dutch animal names zeeleeuw (literally sea lion) and zeepaard (literally seahorse).

During her time of using Dutch, she apparently created a Dutch personality, as well. It all started when she was called by her legal first name Martina at school. At home, we would call her Martinka, which in Slovak is a diminutive form of address – showing affection. As nobody ever called her Martina before, she was convinced that Martinka was her Slovak name and Martina her Dutch name, failing to realize that Martina is the official version of the name in Slovakia. She applied this “everyone has a different name in different languages” strategy to such an extent that when she was asked what her sisters’ names were, she replied that she did not know, as she missed the Dutch versions of their home names.

Transgressing the borderline between the two identities she developed seemed impossible when receiving speech therapy. Obviously, she would go to a Dutch logopedist (speech therapist) and made great progress with her dyslalia. In spite of all efforts, she refused to practice speech therapy in Slovak as well. Nevertheless, her speech in Slovak slowly improved, too, and we thought we were done with speech therapy forever. At the time, we moved back to our home country. Martina suddenly lost her Dutch identity and her newly acquired speech habits in Slovak along with it. (Another year of speech therapy in Slovakia followed.) Sadly, Martina gradually lost her Dutch language skills, as well. However, she did recognize similarity to Dutch in some words in English when she started to learn it as a foreign language in her new school in Slovakia.

In any case, I believe that the bilingual experience at such an early age taught her a lot: She learnt that people around the world speak different languages, that different languages work in different ways, and that translations are not always verbatim.