Last semester was my semester abroad. What I really do not want to skip because it might be of use to you is the whole procedure before departure. The deadlines of application for a university programme are fairly clear. What might not be clear from the start is what exactly it will entail, as this is different per university. My classmate Lynn for instance, had to complete an English proficiency test even though we are in an English programme at university, and this took a lot of time. For me the application to the university did not seem too much of a fuss, until I had to apply for the visa. Every embassy or consulate is different, so this might not apply to different countries, but beware of the time and money it is going to cost you to obtain your student visa. Then again, if you are a bit more organized than I am, or go to a country with less requirements, you might not have these issues at all. I unfortunately was not aware, which led to a delay in my visa and thus my flight and start of the semester. Another thing to keep in mind is that the exchange office is not your communicative link to the other university. I again was not really aware of this when I called the exchange office for help, when I knew I was not going to be able to be there at the start of their semester. But you will have a contact person at your exchange university and us (third years) of course for questions. Not a great start, but I was able to go just a few weeks later.

When I was in the car of the transport service recommended by the university, driving from the airport to my accommodation, I was immediately confronted with a way I life I never got comfortable with. My driver drove through a red light, and while already having read about it, I asked him why anyway. My driver answered with something along the lines of ‘because you never know who is behind you’. Crime, especially in Johannesburg, is of such frequency that people drive through red lights so they don’t have to stop the car in the street at night. A friend later told me that people also don’t stop (or get out of their car) for police, because if it’s real police they will guide you to a station while you’re still in your car. The accommodation, in the city of Pretoria, was a sort of village of about thirty houses within a guarded fence. I met my housemates, got settled and went to university the next day. I chose South Africa because of its multicultural, multilingual, non-western society. The courses I chose were more or less about that too and did not disappoint. For instance, the syllabus of my anthropology course read: “(…) in fact, many political scientists and economists think that because formal political and market institutions are not distinct in non-industrial societies, that there is a lack of politics and economics in such societies. ‘Non-western’ societies are then often defined as lacking in something; they become a symbol of an absence, a void (e.g. pre-colonial, less developed, informal, weak, lacking in democracy, etc). Anthropologists caution against such ethnocentric theorizing, which takes political forms and economic institutions developed historically in one part of the world as models for the rest.” This is exactly why I wanted to go on exchange and I imagine many of you want to go abroad, to recognize what perspective we were taught from, and learn about new perspectives. I quickly learned so much, not just about general subjects and not just from the material and the professors, but from the discussions that arose in the classroom as well. Many of these issues were based on race, something we do not address so much in our daily lives simply because it does not seem like a part of it. But the continuation of certain aspects of Apartheid in South Africa became clearer the longer I was there, and is hidden in so many different issues in the country. 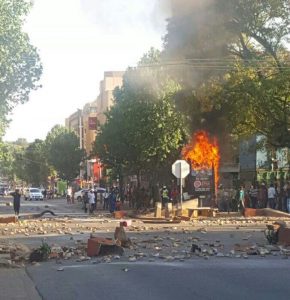 A piece of my diary when the protests started: “Since the announcement that university fees are going up, protests have started at my university. The fees are already very high, I would have had to pay over 3000 euros for the semester here. A while ago, the UP had announced that their fees would not go up. When they announced that they would do so after all, students were very upset. Our fees are going up each year as well, but I think that one of the biggest differences here is that in our country there is much, much less economic inequality. Especially the black population of South Africa is relatively poor compared to the white population, causing even more tensions. There are some weird things going on at UP as well. I heared that professors make a lot of money, and are using their own publications a lot for their classes, making them more money. This university is also still teaching in Afrikaans as well as in English, and I have heard that the funding for courses is 50/50 Afrikaans English. This while there are a lot less people following Afrikaans classes. I believe it was planned to stop teaching in Afrikaans, and one would think that this would save a lot of money, but fees are still planned to go up. Besides the actual cause, it might also be a way for people to release some of their anger, as seems to be the case in a lot of protests and riots. In Pretoria things seem to be pretty non-violent, although the police have used a taser on students in these few days of protest. In another city things are worse, in Joburg (less than an hour away) students have set fires at the university and it also seems not to be safe in student residences. But so far so good in my city and residence.”

While we were not bothered by the protesting students, a short while after the protests started I was robbed in Johannesburg while walking to the train station with two friends. The protests continued and in many other cities there was violence involved. My university closed down every day, until they decided to close it for the rest of the semester. Some students still had classes in cafés or in professors’ homes, but for me it was the end of my classes. I had made three trips in South Africa so far, did not feel comfortable walking around on the streets and while I was sad to leave, I felt it would be best to go back home. Home where we can walk on the streets and in the park by ourselves. Home where we don’t have to lock our cars as soon as we’re inside or drive through red lights or fear the police. South Africa is a truly beautiful country, with wonderful nature and friendly people and good food. But I also experienced South Africa as a violent country, with enormous tensions. I would not recommend living in Johannesburg or Pretoria. I have met people who would recommend living in Cape Town. There are most likely many places that are very nice to visit without any problems. I thought I would be okay with being in a country for half a year in which I could not really go out by myself, in which I would have to be cautious most of the time. But having talked to people who were born there who told me they wanted to leave because of that daily fear, and having lived there even for a short while myself, I now know it is not my place to be. However I would not say it was a bad experience, having learned so much. The few classes I did have, the people I met, the places I visited, even learning which environments are not for me, I guess made me richer.