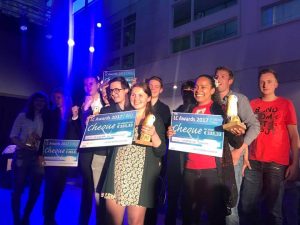 A short while ago, we asked you on our social media accounts to vote for our Multilingualism master student Donna Noonan — who is conducting research on the English language spoken at Dutch universities — as she was competing in the race for the LC Awards 2017. We are very happy to announce Donna won the LC Award of 2017 in the academic category! A very big congratulations to Donna, we are so proud to have this level of excellence in our MA programme!

Even though the Irish-born Donna was impressed with the amount and the level of English spoken by Dutch students and lecturers at the University of Groningen, she heard many students complaining about the levels of English spoken in lectures. Donna was eager to know why this was the case and decided to research the topic. For her research, she recorded 11 non-native speakers of English with different language backgrounds. She showed them cartoons and asked the respondents to tell her what was happening in the cartoons.

So does having a strong accent mean that the level of English is perceived as poor? One would certainly say so. However, Donna found that the way of communicating the message was more important than the accent. In fact, the accent of a speaker didn’t seem to matter at all in how a person was rated. With these results, Donna wants to make some proposals to universities on how to work with this, as the amount of English is becoming increasingly important in universities.

Video and article in Leeuwarder Courant

Watch Donna tell about her research in the video and read about her winning the award in the article below: