Jesse van Amelsvoort studied comparative literature and philosophy in Utrecht and London and graduated from the Euroculture master programme in Groningen and Göttingen. In 2016 Jesse joined our department as a lecturer. 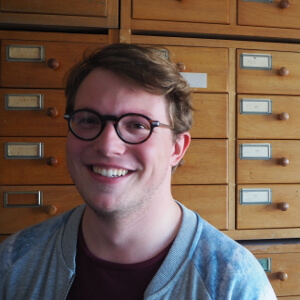 And yet again we have an award winner in our midst! Jesse van Amelsvoort has been awarded the Annual Liesbeth Brouwer Award (or ALBA) for best MA thesis in the Erasmus Mundus Master Euroculture for the cohort 2014/2016! Liesbeth Brouwer (1953 – 2006) was an active and inspirational lecturer who contributed significantly and creatively to the development of the Euroculture programme – not only at the University of Groningen, but also within the network.

Best MA thesis: Houses of the Past

Every year, the ALBA Thesis Awarded (500 €) is awarded to the author of the thesis that, according to the jury’s opinion, most effectively and elegantly represents the “Euroculture” approach, that is, dealing with current European issues from a complex perspective and approaching the related problems in an interdisciplinary manner. Jesse van Amelsvoort’s thesis, “Houses of the Past: The Contemporary Gothic Novel and the Space of Citizenship,” did just that, according to the jury. The thesis combines Gothic and postcolonial critique to expand the notion of citizenship in contemporary Europe.