Next week, there will be a special screening of the video Injury Time- the rise of the 80-minute nation, about the South-African anti-apartheid sports struggle. To understand the context of the video a little bit better, we have asked the maker, Mark Fredericks, to tell a little bit more about the video and the issues tackled therein. Read the interview below!

Mark Fredericks is a Video Lab Technician working in photojournalism at Walter Sisulu University (SA). Since 2001, he has been creating a large video repository, centering mainly on sport, sporting history and community memory in South Africa. He will be discussing his work after the screening of the video. In leading up to this event, we’ve asked Mark Fredericks to elaborate some more on his work and research. 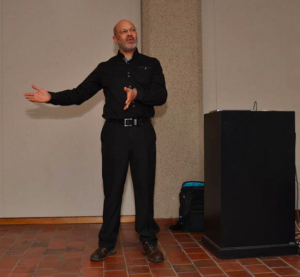 How did you get into photojournalism and sport, and, more specifically, how do you use this angle to address issues related to the democratization of South Africa?

My interest in sport is deeply embedded in my identity and that of many of my friends and family. It was one of the few ways oppressed people could enjoy leisurely pursuits under the apartheid regime and it doubled as a means of resistance against the apartheid regime. From a very young age I was made aware of the disparities in the news media when reporting on sport. Through sport I (along with countless other young people) were then introduced to other disparities in society, with sport as a vehicle for social and political education. It was proposed that sport could not be separated from the society in which that sport was played and enjoyed – so if sport was segregated and facilities and community structures reflected the segregation, then that society was obviously flawed. South Africa of 2020, if looking only at sport, reflects much the same flaws as apartheid South Africa. Sport, in this sense, is the perfect lens through which to examine South African society, because of the political importance placed on sport as vehicle of social cohesion and a symbol of the South African miracle.

Why is sports such an interesting angle from which to view notions of democratisation, unification and social cohesion? And, what function does sports take up in South African society?

I find sport to be fascinating because of the nature of the transition from apartheid to democracy – it raises several questions and made me consider that sport was/is a distraction rather than a vehicle for social cohesion.

Firstly – Nelson Mandela was released in 1990, but this was preceded by many clandestine meetings between the ANC and apartheid sport & business that was designed to cripple the anti-apartheid sports movement. In the end, the apartheid system was triumphant and today serves as the model for South African sports ‘development’ and it is paraded as the barometer of South African success. This is a complex question to answer, so I have given you a brief introduction, but also consider the following:

1990 – Nelson Mandela released
1991 – SA Cricket officially breaks South Africa’ sporting isolation as the ANC lifts the sports moratorium.
1992 – SA marches in Barcelona Olympics. No flag. No anthem (Ode to Joy was played). Nelson Mandela sat in the stands waving on a team from a country he could not yet vote in.
1993 – CODESA (Congress for a Democratic South Africa) was concluded and an election date was announced.
1994 – South Africa has elections & Nelson Mandela becomes president.
1995 – South Africa hosts the IRB Rugby World Cup.

Since then, South Africa has hosted the 2003 ICC Cricket World Cup and the 2010 FIFA soccer world cup. These sports events have taken precedence over the development of essential social structures and services for poor communities in South Africa. Sport is just a way through which South Africans can celebrate something while ignoring horrific social conditions. Nelson Mandela’s performance as the healer of the nation has been seared onto the psyche of not only South Africans, but mostly the world. There’s even an international Mandela day – but very little examination of what his concessions have meant to ordinary South Africans. If sport is looked at in isolation of the society that frames it, then the result is all that matters – it is therefore important to look beyond the frame of what is presented.

What do you hope to achieve with the video, screening it to diverse audiences worldwide? And lastly, are you yourself a sportsplayer?

I played rugby between 1982 and 1990, but I remain a keen follower of sport and I am still a member of my rugby club – Universal Rugby Football Club in Kimberley, South Africa.

Primarily I started the project because I wanted to capture the voices of sports stars and activists who inspired and raged against the apartheid system through sport.

This is very deep history and sport forms a central and important component that unlocks much of the hidden South African story.