The M&M bachelor’s programme is filled with interesting and diverste students. Over the coming few weeks, several of them will share their experiences with the programme with you! Find out who the M&M students are and what studying M&M is really like. In this article, fresh bachelor graduate Aileen will not only reflect on her time in the programme, but will also look forward to her future.

My name is Aileen, I am 21 years old and I grad 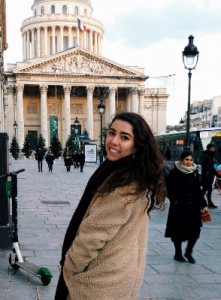 uated from the M&M programme last summer. I started the programme three years before, in 2016, because the combination of history, language and politics appealed to me and seemed unique (at least in Groningen). The topics that were treated during mini-lectures at the Open Day were very interesting, thus I decided to apply for the programme. We were a small but cosy cohort, and I liked the fact that everyone could get to know each other well! I think it is an added value of M&M that students and staff are acquainted and you don’t feel like you’re just one of many students. Moreover, study association Multi, where I was a board member in my second year, organises fun activities to meet students of different years and even of different study associations. Definitely join them when you start studying M&M!

After a few months of compulsory courses in the first year, we could choose electives. I decided to go for French, to build upon what I had learned during high school. I started at B1/B2 level and continued with French as my elective for the following semesters, finally ending up with approximately C1 level. This allowed me to go to Paris in my third year during the minor, where I studied Science Politique at Paris 1 Université Panthéon-Sorbonne. The courses here were in French, so I truly needed all that I learned while I had French as an elective. It was an extremely enriching and valuable experience (definitely worth all the paperwork before leaving!) and I would recommend it to anyone. The opportunity to study abroad contributed not only to my French language skills but also to my personal growth, since I was in an unknown city, where I knew no one, for the first time in my life and I had not expected to feel at home so soon.

Besides electives and a minor, I also chose to follow the Honours Programme as an extra track beside my bachelor. Here, both deepening (within your own faculty) and broadening (at other faculties) courses were offered for students interested in doing more alongside their major. We also received courses which were focused on skills, such as Effective Teamwork or English for Academic Writing. I enjoyed the Honours College a lot, especially because of its interdisciplinary approach. In the M&M programme I often worked together with people who had a similar background and similar interests to myself, so it was a refreshing experience to work with people from completely different fields. Moreover, I took courses which I never thought I would take in university, such as one on physics.

Although the Honours Programme is not a part of M&M, it taught me a lot outside of the classes as well. I was forced to make a solid planning and stick to it, which has been a useful skill ever since. Within M&M, I learned skills as well, such as teamwork and doing research. The latter most significantly during the writing of my bachelor thesis last year. While I found all the courses in the programme very interesting, from Contemporary Minorities, to Linguistics, to Multilingualism in Education, the thesis was the most challenging, yet also the most catered to my personal interest. I investigated the integration of Somali refugees in Groningen through a number of interviews. I learned a lot in this process about research methods, as well as about processing qualitative information, writing it down in a concise way, and deleting precious, previously written text. Everything I learned here will be of great value, I think, when I will do more research in the future.

After having finished the M&M programme, I decided to take a gap year. I wanted to take the time to figure out what and where I would like to continue studying next summer. Before continuing my studies in September next year, however, I applied for a Robert Schuman traineeship at the European Parliament for the first half of 2020. I hope this works out, because it seems like a great opportunity! At the moment, I am working some side jobs while occasionally researching potential master programmes. I looked into some master programmes in Nijmegen, Leiden and Amsterdam, all concerning international development or anthropology. Yet, also the Erasmus Mundus Mitra Master on transnational migrations caught my eye. I think M&M has definitely strengthened my interest in these topics, and made me realise that this is the direction in which I would like to pursue a career. I have a strong sense of justice and I hope that by choosing the right path I can do something good for the world!