“I was looking for a study programme that focuses on the dynamics between the minority and majority in society: I’ve found that in this programme. Besides, it combines all my interests: politics, culture, history, and sociology. In Minority Languages I, we looked at languages from these perspectives, both in Europe and globally. I found it really interesting to learn about the (value) judgments we consciously and unconsciously place on languages and speakers, and how this can have harmful consequences.” From this interest, 1st-year M&M student Tess Kanters wrote a blogpost on the decolonization of Creole languages. Read about it here!

While I’m not fond of my ex-boyfriend, I always got along greatly with his parents. They enjoyed talking about their home country Suriname and me and my anthropologic nature relished in listening. Once, his father told me how growing up he was never allowed to speak Sranangtongo, a Surinamese Creole language, at home. Try and disobey your mothers’ orders of speaking ‘proper’ Dutch and as a result, you’d feel the familiar burn of her slipper on your rear. This was the first I’d learned of Creole languages being viewed as inferior to their European equivalents, even by speakers themselves, and how important it is to them that they master these European languages. I came to find out how the attitude towards Creoles is still in colonization her firm grip.

Firstly, what are Creole languages? According to Siegel (2005) it is a process of language development that ensues when people don’t speak the same language yet need to communicate. We can see such processes in situations like trade or extensive (im)migration. Similarly, it is what happened in the Americas when millions of Africans were taken and forced to work for often rotating European colonizers.

Soon, the first Creole linguists appeared because where there is language, there is somebody studying it. Their duty was to research, what they called, “languages created by speakers of a linguistically inferior race trying to learn the languages of a superior race” (DeGraff, 2005, p.548). Since they were tasked with the after-the-fact linguistic justification of slavery, they were massively influenced by race-theories. Their research finally led to the belief of “Creole Exceptionalism”, concluding Creoles are in many ways isolated from all other languages and furthermore structurally deficient. Despite not being based on science but on sociohistorical dogmas, it has aged as a perceived truth which continues to influence post colonial research. Creoles moreover were and are still extensively compared to their European ancestor and are often considered broken varieties of it (DeGraff 2005). Taken together, Creoles are (wrongly) deemed unusable for intellectual objectives.

This is naturally internalized by speakers. When countries gained their independence, they had to construct their own identity. The nation-builders mostly consisted of elites who spoke the European language and with it adopted the ambivalence towards their Creole. This subsequently influenced the masses. For instance, Haitians concluded to be “colored

Frenchmen” (DeGraff, 2005). It reminds me of a book I’ve read, Decolonising the Mind, in which the author speaks of a European “cultural bomb” that is launched upon the enslaved, affecting their belief in their own names, their language and themselves and consequently viewing their history as unsuccessful and so distancing themselves from it (Thiong’o, 1986). Accordingly, when a few Caribbean governments tried to implement the local Creole as language of instruction in education, citizens didn’t agree. Many consider education a means to escape poverty and socioeconomic development is associated with the language of their colonizer, not with Creole (Siegel, 2005). The “role of prestige” (Samarin, 1985) therefore is a decidedly important factor in Creole speakers’ attitude to and their implementation of language. That is, which language will contribute to my social advancement?

Granted, the aforementioned consideration makes a lot of sense. I suppose promotion of Creole needs more attention before language planning could be done successfully. Mühleisen (2002) suggests the prestige of a language can be raised by writing. This practice has indeed been applied by Creole intellectuals trying to achieve just that.

If we go back to Suriname, Henny de Ziel for example dedicated his life to the advocacy of Sranantongo. The poet aimed, and succeeded in my opinion, to demonstrate how it’s a complete language capable of expressing deep and complex thoughts (Marshall, 2003). Figure 1 and 2 show Henny and one of his poems about self-determination. 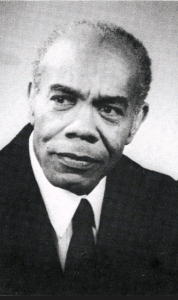 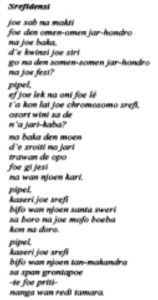 Since the economic capital of Creoles however appears the biggest obstacle to formal implementation, I think increasing this capital is essential. Such could be done by writing scientific research and educational texts in Creole and for instance, using it wherever decisions are being made. Also, based on Mühleisen’s (2002) thinking, translating existing European texts of this type into Creole could show it possesses the grammar and vocabulary needed for “intellectual” usage.

All in all, these are just some brief ideas, but I, like many others, live in a country that has gotten rich from colonialism. I believe it of utmost importance that we recognize colonial sedation and
suppression to be everlasting and as our collective responsibility. Language is just one mere stroke on this painting, and we should wonder how many other ways colonization vastly influences day to day life.